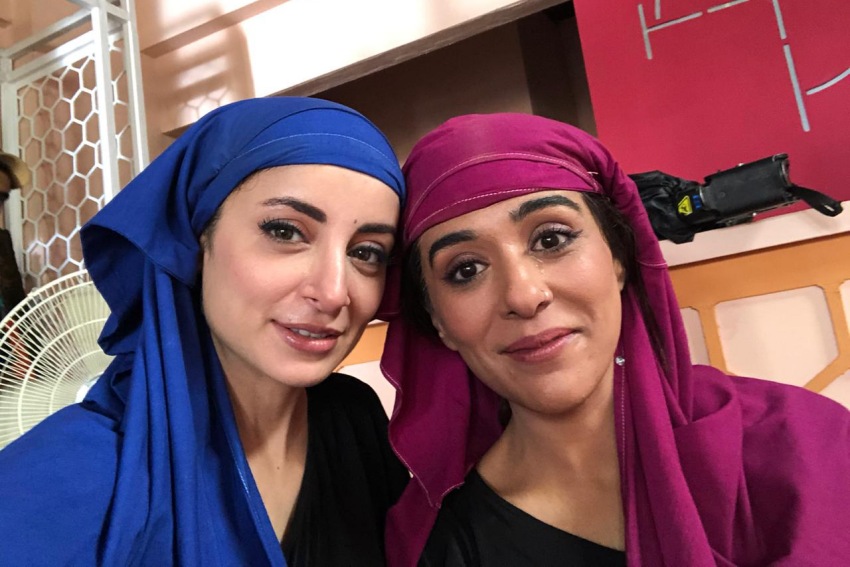 A web series that’s got everyone hooked, we recently spoke to one of the stars of the hit show “Churails” – Sarwat Gilani to get all the juicy details about how the web series came to life. Written and directed by Asim Abbasi, the show stars Sarwat Gilani, Mehar Bano, Nimra Bucha and Yasra Rizvi.  A story about women coming together to get justice for each other, Sarwat went into detail about all the trappings, issues and behind the scenes moments that we all were eager to learn about. Scroll down and have a check out the complete interview below:

Q) We have all seen the trailer it looks incredibly gripping, can you tell us what the show is all about and your own character specifically?

Churails is about a few women who come together to create a secret agency to catch cheating husbands. Sara is a lawyer and I’m playing Sara’s character, she’s a perfect housewife an she is expected to be that perfect housewife and homemaker who finds out her husband is cheating behind her back with about 75 girls so her life and her perception of a perfect life starts crumbling and in that moment of weakness and vengeance she wants to get back at her husband and many other men in society who cheat and nobody is there to blame them, catch them or question them. So she wants to get back at those people by creating this agency with her friends. You will see in the flashbacks that Sara protects her husband from an affair she thinks he must have had, so there are lots of insecurities and vulnerabilities of Sara. There are moments when you’ll see her leadership qualities and her being very strong for the women like she feels responsible for these women.  Any time something goes wrong she feels entirely guilty and takes the blame and takes the blame all on herself.  Slowly and gradually as you watch the episodes you see a very real Sara and she’s strong,  she’s weak, she’s vulnerable she’s persistent, she’s a leader, she’s a failure also- so there’s lots of shades that you’ll see in Sara’s character.

Q) Tell us about the background to how this project developed and how you got involved with it?

I was familiar with Asim’s writing and Asim’s work and after his film “Cake’ I think he started writing “Churails” so from London he messaged me that he had something for me to read and then I read it and I was over the moon and I said yes I want to be part of it because the story was very strong and it was a very different kind of story. Then when I had a chat with his team, especially with Mo Azmi  the cinematographer; his way of shooting I had seen before because I had worked on a project with him so as the names started coming in I was like wow this is a dream team, I couldn’t wait to be part of such an amazing team with such an amazing, focused subject that they had in mind.

Q) So you must have some idea about the sort of reactions the show will get? Tell us about how you think people will perceive the show?

Yes, absolutely so when we used to do our readings and rehearsals and while we would practice our lines. Obviously they were different lines from television but then this isn’t television content, this is web content – it’s always different, there’s a little liberty you can take from regular television guidelines and boundaries so we were well aware that some people’s reactions will be different and we weren’t sure how they would receive it but after the release of the trailer people were very intrigued and they were very interested in knowing what it was about and when we were shooting we were a little skeptical of how people would react to the burqa and the word “Churails” together but you know it was just so unbelievable that they all loved it and it was understood that it was not done for any glam factor but just because it related to the story whether there was smoking or bad language, it all made sense once you watch the show. And most of the reactions were good and even the reactions that weren’t that’s ok too because everyone has certain things they’re attached to so yeah we were skeptical but we were absolutely overwhelmed by the kind of love and response and curiosity that “Churails” got from people, not only in Pakistan but all over the world.

Q) From the trailer the show seems to project some strong powerful female leads? How does it capture women empowerment?

In our entertainment industry we don’t usually tap into such major and real issues of women- we consider them to be taboo topics and even if we do we do it on a very surface level but in “Churails” I think a lot of serious issues are put into focus like early child marriage, elite scrutinies of women, parents not accepting their children for who they are. For women it’s sort of difficult to survive, the kind of survival instincts they need to be living on the roads. There were a lot of issues that were addressed in “Churails” and the beauty of all those issues was that they are all real, we’ve seen them, we’ve talked about them so there was nothing alien about them, these were issues that were present around us. Women face these issues globally, of being accepted, appreciated, included so these are the issues women face globally and they were very beautifully and sensitively touched on. I think the most astonishing part was all these characters were very real, there were no black and white characters- each character was flawed and each character had great things to talk about. I think that’s a very real way of telling a woman’s story, not any woman is born bad- it’s the circumstances that make it difficult for her and change her. You’ll see the characters transitioning from good to bad and bad to good and in between.

Q) What were the challenges to playing this role and what did you love most about it?

Because I’ve acted in television and film over the years, my biggest challenge was this preconceived notion I had about acting one we’ve always practiced and directors have always had us do it a certain way over the years. With Asim I had to shed all those preconceived notions I had about acting for Sara and I had to shed a lot of ways of emoting and learn new ways of emoting and learn how to restrict my acting and restrain it yet act. I had to hone a lot of my reigns to look like she has a complete façade of calmness around yet there could be a volcano eruption going on inside. That was a bit tricky but overall it was a wonderful learning experience.

Q) Tell us a bit about the styling aspects we have seen you wear Sanam Chaudhri in one of the shots can you tell us a bit more about the clothes and styling?

Yes, Sara’s styling was very appreciated and Samiya Ansari was our stylist. I feel it’s very important for the artist to also manufacture the character. Once we go on set or when the pre-production things are happening so Samiya and I got along very well and we worked on Sara’s wardrobe and her styling. Sara’s character was written like not even one hair was out of place; she had to be very proper and very sleek and that was her look from the rest of the craziness happening. When you come to Sara there’s a calmness that comes to the screen that defined proper look. Samiya’s styling sense is amazing, so because she was involved from the preproduction time she was very well aware of how to style each character. Yes, in one of the scenes I’m wearing a Sanam Chaudhry top which was a super-duper hit and people have been asking me about it and it was really nice of Sanam to give it to me.

Q) Do you think given how different this whole series is in terms of story line and language, it will invite any controversy from audiences and how is that a benefit to our tv and film industry?

We didn’t want to keep controversial things just to make it spicy, there are controversial things in our society and we’re just trying to reflect on them. I’d like ideally for our television community to talk about stories that are different from marriages and extra marital affairs, they need to be a little more meaningful and uplifting for the women who are watching. It’s very important and I really hope people have been left with a great impression with “Churails” and they want to up their game by creating stories that are real and not fictional and have a good impact on the people who are watching or atleast leave a question in their minds after watching it. I don’t think I’ve ever had that feeling after watching a television play, it didn’t incite me or make me question anything and I think “Churails” is different in that manner.

Q) How can people watch Churails?

You can download Zee5 from your mobile app store and it’s an app basically. You can watch it there, it’s fairly simple you have to pay a small amount which is like Rs.250 per month and I bet once you download it you will just binge watch “Churails” from the first episode to the last because it is just that binge worthy.

The last thing I’d like to say is for people to keep an open mind and to know what the target audience is and not judge the content in comparison to Pakistani television, it is far away from that content- it’s content made for the web, thus the difference and so I’d like people to watch it with an open mind and an open heart and feel proud that Pakistan has finally created a product which is globally appreciated and people abroad are going goo-goo ga-ga over it and I’d like to see Pakistani’s do the same!

Thank you Sarwat for sharing your views and insights! Everyone if you havent already then go watch this show and remember to appreciate it for the real issues it brings to light that are occurring in our society.

Style Notes: Summer Style Will Be A Breeze With These 13 Monochrome Looks!