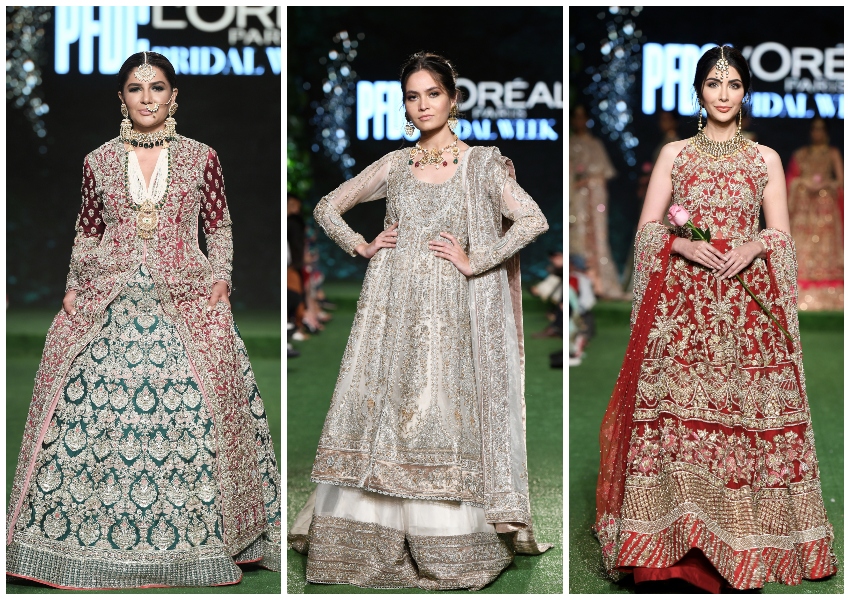 The ninth annual PFDC L’Oréal bridal week commenced this week and we were kept on the edge of our seats on the first day! The line up included talented designers such as Hussain Rehar, Nida Azwer and Saira Shakira. Each of them brought their own distinct magic to the ramp, with intricately gorgeous bridals that garnered praise and love. Influenced by old world culture as well as contemporary trends, these three knocked it out of the park! Scroll down to see more!

Hussain Rehar:
Fateh Pur By Hussain Rehar was an an amalgamation of rich colors from the Punjab. From Punjab motifs, the designer emphasized his vision and his love for the province through this collection. Inspired by women empowerment as well as cultural allure, the aesthetics were one to watch for!

Nida Azwer:
Anarkali by Nida Azwer inspired by rich Mughal heritage of art and textiles. From beautiful zardozi and kamdaani work as well as many other fine embellishments to the gorgeously worked dupattas and peshwaas, this collection had something for everyone! Nida Azwer stayed true to her love for the Mughal architecture with motifs in each bridal.

Saira Shakira:
The finale that wrapped up day 1 was non other than designer duo Saira Shakira! Showcasing Kali – a bloom, it told the story of a flower blooming and growing more beautiful and mature with each passing moment. The bridals revolved around florals and nature. The pieces included crystals, pearls as well as gota and sequins on soft hues and quality fabrics. Suffice it to say, Saira Shakira kept everyone captivated!

There you have it guys! Stay tuned for day 2!