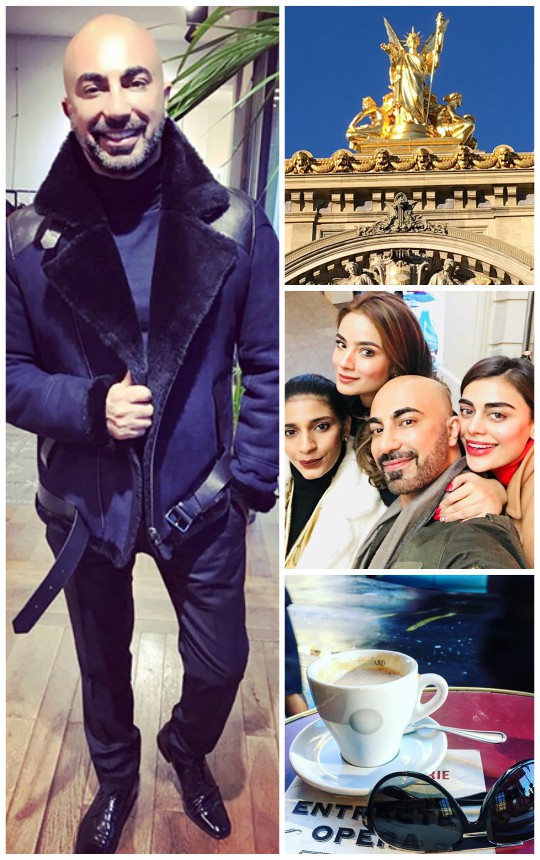 “I always feel so incredibly happy when I’m there. Disconnect from the world but you’re also in the world. When you’re in New York, you get the feeling you’re in the heartbeat of the world. When you’re in Paris, you feel like you’re in the perfect world. You feel relaxed,” says HSY as he reminisces on the electric energy he experienced on the streets of Paris. We recently had a talk with the adventurous and vivacious HSY who has risen to become one of Pakistan’s perennial couture designers. He recently attended Paris Fashion Week and came back inspired with ideas that he has gracefully shared with us. He found warmth and pride in every corner of the city.  From recording the beauty of the city through his notebook to surreal moments of seeing Cindy Crawford and Gigi Hadid, the King shares it all below! 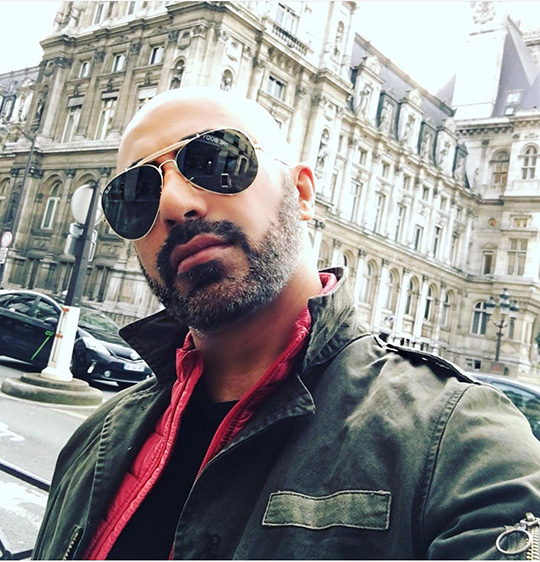 You have been designing and elevating your strengths as a designer for many years, and you’ve played an eminent role in shaping the fashion culture of Pakistan. How did it feel to be a strong representative of Pakistani fashion in Paris for Fashion Week?

It felt amazing. Moments like this put things in perspective. It’s the perspective I get when I travel. There’s a disconnect from Pakistan to the rest of the world. Pakistani designers feel they’re a big fish in a small pond and I’m seeing it happen more and more. Seeing a city like Paris is a humbling experience because you realize you’re a large spec on the dust storm. I remember going to fashion week in NY and London, I felt intimidated for the first time but once I let that go, I found it to be much more exciting. So yes, I was incredibly proud to be representing that. I’d like to point out that we’re in that infancy stage and we should be willing to see how we can be better. We shouldn’t be so hard on ourselves as Pakistan is an incredibly young country –  predominantly of millennials, and we should strive to keep on learning and improving ourselves.

You’ve met designers from all over the world. What would you say they have that inspires you? Would you ever want to collaborate with one of them?

I would love to collaborate with an International design house. Designers are a lot like us. Predominantly flighty a little moody. Emotional. What makes abroad design houses great is discipline. Discipline is key. Creativity is imperative, but discipline is key. Not just business acumen. I went to the Givenchy studio and I met representatives from Condé Nast who talked about how beautiful they found my embroidery, and I was flattered at the amount of research they conducted on my brand. The element of collaboration did come up but I can’t say much about it due to pricing and availability. With a collaboration like that, I would love for doors to open for other local designers as there’s a lot of potential. It can only happen if we’re more visible. Rub shoulders with the likes of people who see our works and not the stereotypical image.
Our guys aren’t so sure about fashion social networking. You’ve gotta walk into that place and own that room! Very important part of fashion. Bring the attention to yourself and then you’ll bring the attention to the world. Don’t be comfortable with the same destination and the same four restaurants with the same four people. Have to be able to integrate. It’s that first step that people aren’t willing to make because they’re afraid of rejection, fear of sounding awkward. Embrace the fact that you’re different. Once you step into a situation where you’re not surrounded with the same people, you’ll find that it isn’t all that bad. Any personality is exciting as yours is. I grew up as a single parent’s child. I wasn’t sheltered and started working at the age of 12, so my stance is different. I wouldn’t say I’m stronger than anyone, and I understand that people want to stay with what they’re comfortable with. In the world of fashion, you’ve got to step out of that. If I have the ability to communicate, I would want someone else to join me. 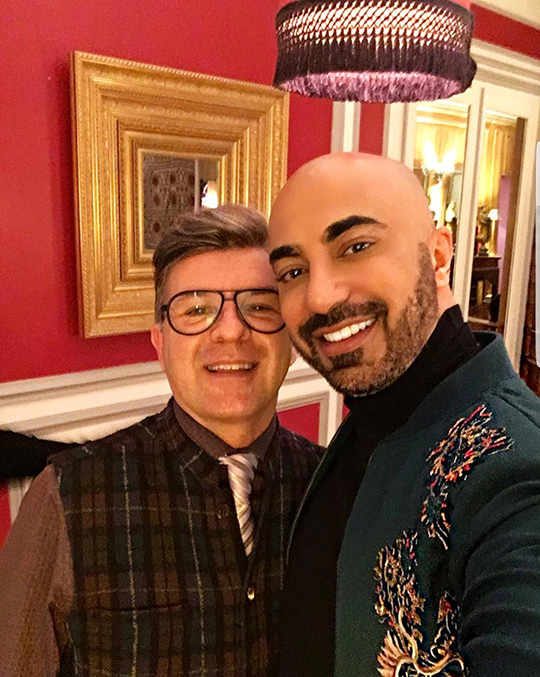 Which designers were you blown away by?

Givenchy new couture collection. First collection by this designer Clare Waight Keller and I was absolutely blown away. When someone new comes, I always think they’re depending too much on their predecessor or leaning towards too much embellishment. But it spoke to the designers talent. She used dark manipulations to create shape, and it was phenomenal and clean. Wasn’t expecting that! Really breathtaking.

Which stand-out pieces did you most admire?

Ramial Ali a Middle Eastern designer who does couture in Paris. I went to the Ritz hotel in Paris where his work was showing and I found this incredible baby blue half jumpsuit and half gown outfit with filigree design. The back of the outfit turned into a half blazer and half low-back. So many elements that would usually go wrong. It had beautiful embroidery. I was so taken that I couldn’t move away from it. We’ve been friends for a long time so I wasn’t at all filtered when I went up and complimented it heavily. I said there were so many elements of design but you made it seamless! I envisioned Audrey Hepburn owning this outfit. It looked unbelievably glamorous and elegant. 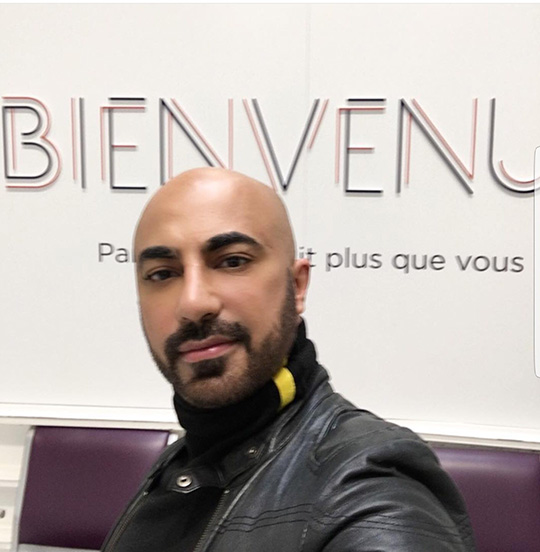 If you could handpick any element from PFW and transport it to Pakistan’s Fashion Week, what would it be?

The element of spreading the positivity. That anything that can happen. The glamour of what fashion week represents in any corner. It served you a hot slice of fashion from its pie. The first time I’ve been to couture fashion week and I was expecting it to be like NYFW. Last week of men’s couture fashion week, and even though they say men’s a smaller business, it didn’t feel that way. The entire city was about fashion and fashion week no matter which corner you were in.
Everyone who has ever been to Paris says their heart gets stolen right there and then. Do you share that same sentiment and why?
It’s absolutely true. I left my heart behind it Paris every single time I come back. I don’t know what it is if it’s the light or the feeling or the sense of romance. I’ll tell you, when I was at the Ritz viewing Ramial Ali’s work, it was quintessential Paris with beautiful lighting inside with faint Arabic music and a baroque chandelier, while it was pouring rain outside. You could say the aura was incredibly romantic. Of course being from Lahore, I craved chai and samosa! There was a moment where I stepped outside and I truly discovered the glitter Paris is famous for! In one moment I saw Cindy Crawford standing right outside and walking into the show happening next door. Blown away just looking at her. And as my  car comes up and another car comes up while I’m still focusing on Cindy, there appeared Gigi Hadid! It was crazy to think how one moment of fame carried another surreal and similar one back to back! 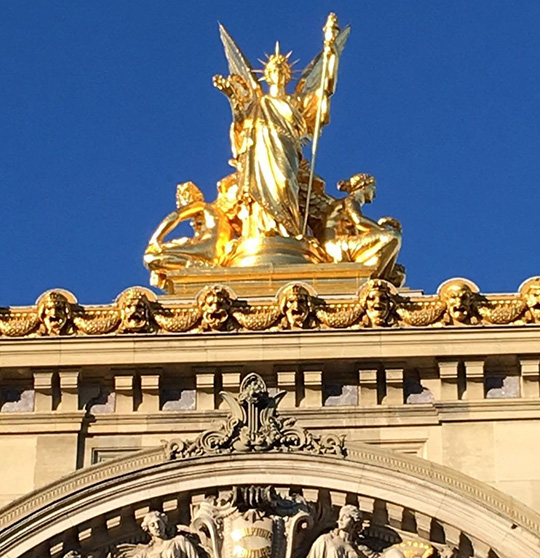 On the days when you weren’t attending shows, how did you pass time?

I had a lot of friends there and it was a big contingent of my middle eastern friends. We call ourselves the brown boys, so it was a lovely time being with them. I witnessed one of the Middle East’s biggest couture businesses, went to the museums like the Louvre and the LV center where we saw an Andy Warhol exhibition which was very cool. Two of my friends are buyers for multi brand stores in the Middle East so I went with them. Even though we were in Paris, we heavily indulged in Italian Food! 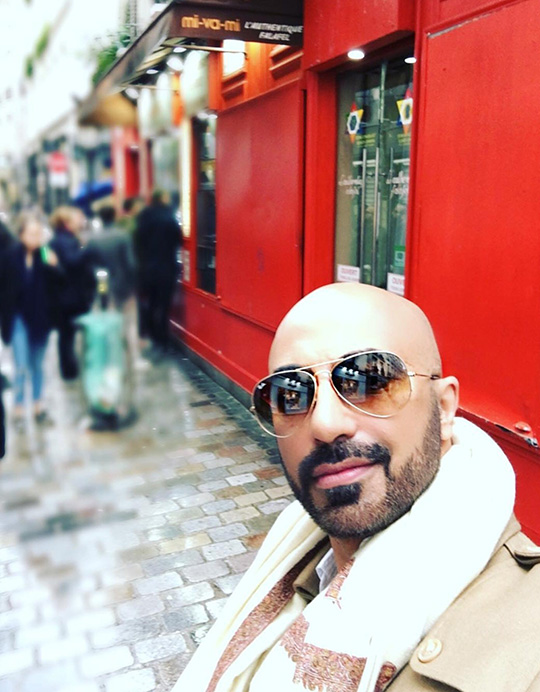 If you could recommend any Parisian restaurant or patessierie, which one would it be?

Maisie Cafe – a  Cafè owned by one of the women who runs the LV foundation. It’s a health cafe with fun interesting detox food. It’s got a great fun fashion vibe attached to it. I really enjoyed their fresh cucumber juice and kale salad. I’m a big lover of healthy food! Kinu Japanese Food – I really enjoyed that. The third one was Manko Restaurant, which served Portuguese food I believe and it has a show at the end of the night which isn’t for the faint hearted! Photography isn’t allowed. But I will say it was chic and it had a lot of fur being worn by the performers! It was almost like a multiple personality split between the vibe before and after! Would highly recommend that!
What have you taken away from this trip and what would you say to someone who has never been to Paris?
What I’ve taken away in terms of business is details. Focus on the details of fashion. Not just the ramp – before the ramp, after the ramp. Focus on the pre and post event and how it is translated to your media. Provide a clear and detailed description. We do not sell a need or a want. We sell a desire that can’t end on the ramp.
Go with an open mind to Paris. I carried a notebook with me in which I wrote down everything about what I was feeling and witnessing. I think it’s important to record your trip and your thoughts. Hit the tourist spots the first couple days and then get a bike and explore. Paris is my favorite city to get a bike because you can discover so much getting lost. Although everything isn’t as rosy as it would seem, but there’s a sense of ownership that the Parisians have of their city which I’ve never seen. At first it’s daunting but then when you realise the degree of things they’ve given, you stop and appreciate it. 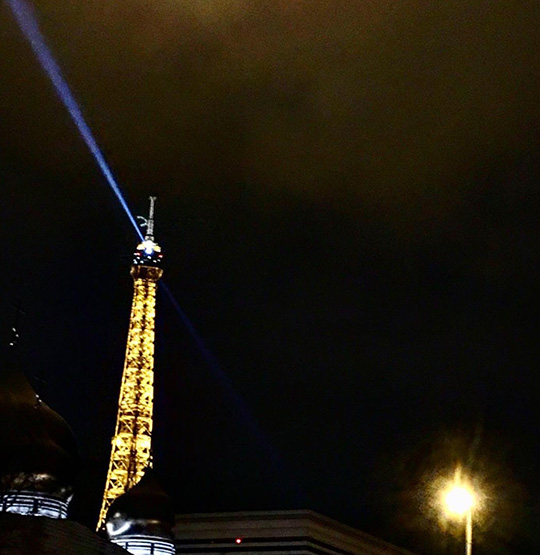 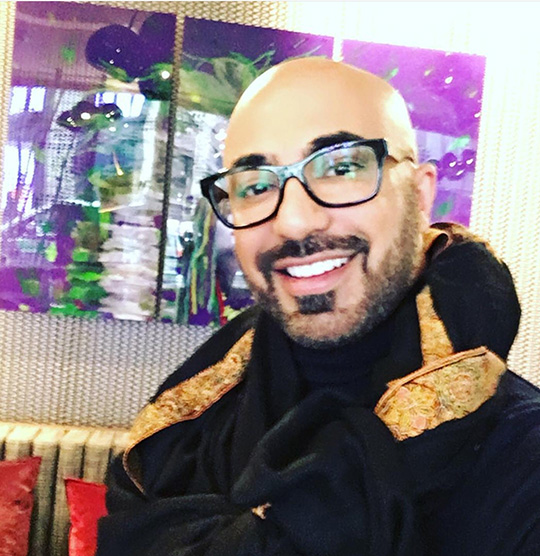 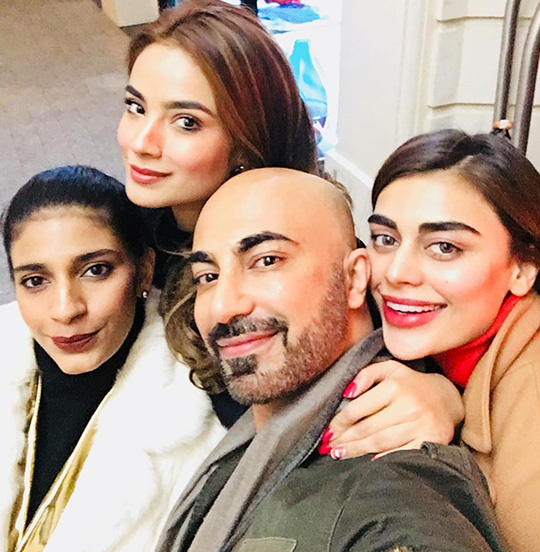 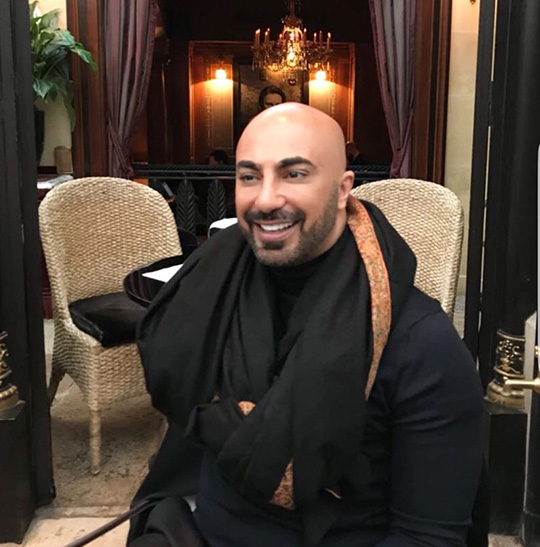 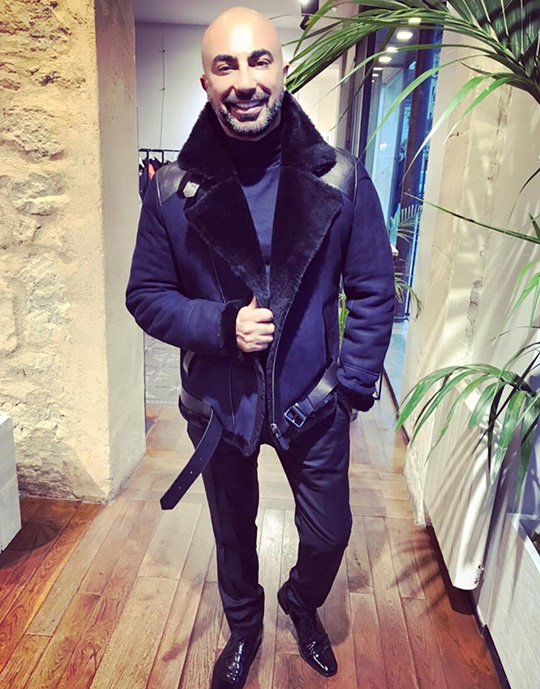 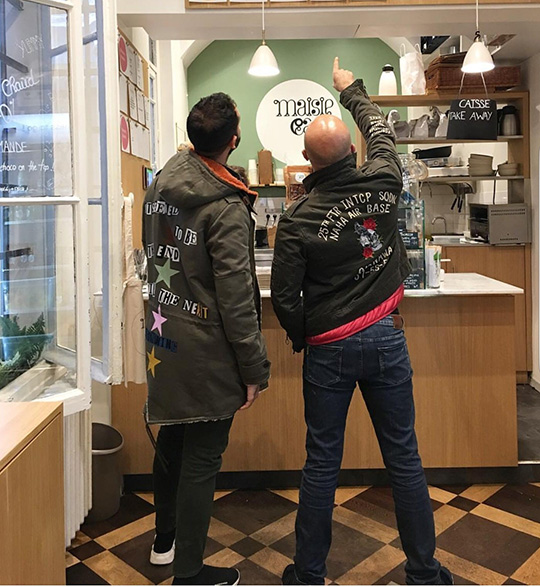 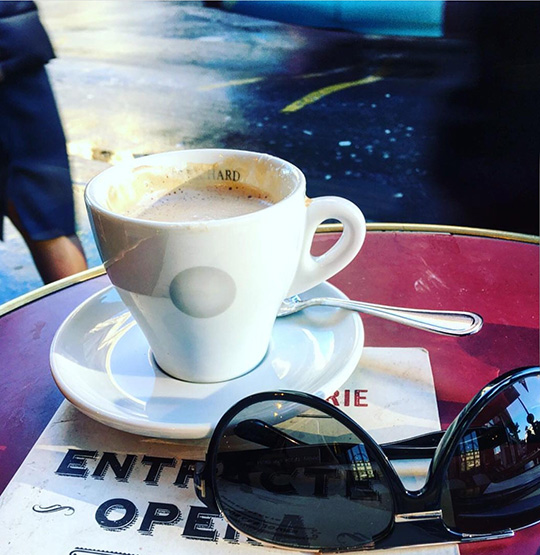 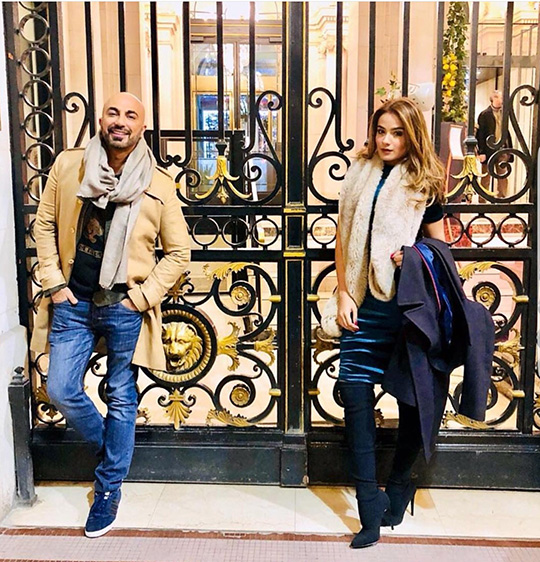