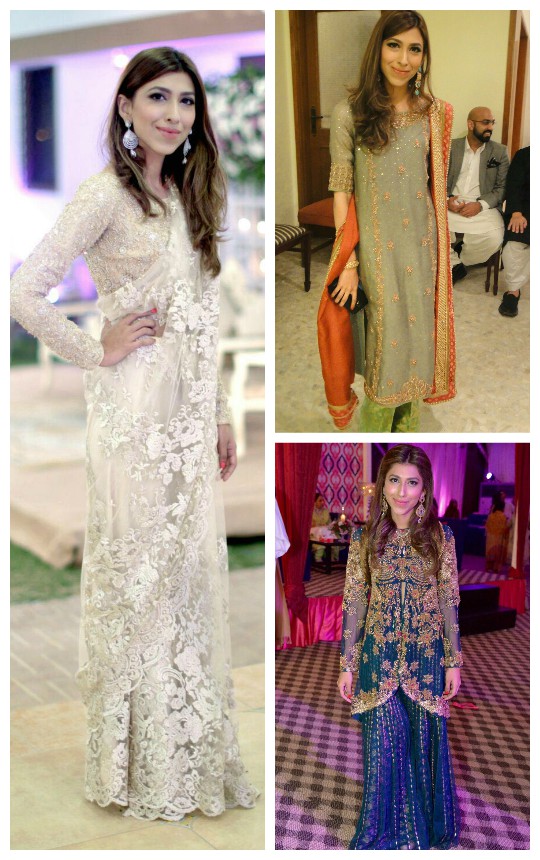 When your own sister is an ace luxury designer there’s little more you can want for! The lovely Rabia Farooqui was recently spotted at their brother’s wedding sporting three stunning looks all courtesy her celebrated designer sis Nadia Farooqui. Along with each of the look break downs, Nadia takes us through her creative process and details for each of the Mehndi, wedding reception and Valima styles she created for Rabia. Take a look plus an exclusive first look behind the scenes at the Nadia Farooqui upcoming SS’16 luxe pret collection campaign!

Did your sister have her own ideas for the occasions that she asked you to keep in mind while designing the outfits?

My sister had a very clear idea of what she wanted for each occasion. For mehndi she wanted a twist on the ghagra-choli concept without showing too much skin. To execute this look we decided to play with sheer net which we left see through in some areas and gave her high waisted flared pants instead of a ghagra. For the baraat, she wanted something traditional – so we gave her an embellished dupatta paired with a long straight shirt with intricate handwork in naqshi & dubka. The colors were kept subtle with a pop of rust to make sure she doesn’t look too old! For Valima she wanted an eastern look with a western feel – a sari we felt would do justice. The blouse was fully worked, embellished with pearls to give her the western feel she wanted. 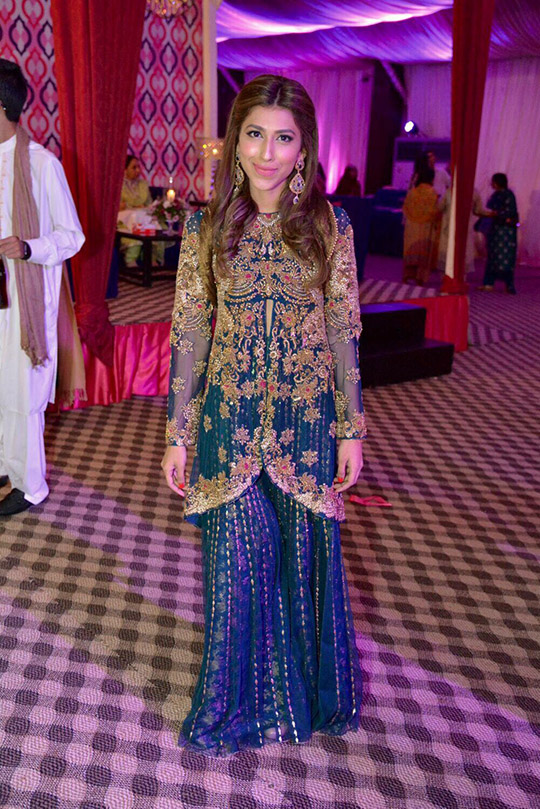 What was the one thing you wanted to focus on for each look?

I made sure that each look stood out whether it was through choice of colour or cut; whatever it was we made sure she looked her age! Since she’s young I didn’t want the outfit to overpower her youth!

Particular trends you followed for the silhouettes that you are fond of at the moment?

The crop top and the high waisted pants are a personal favourite these days and was evident in the twist in lengha choli. 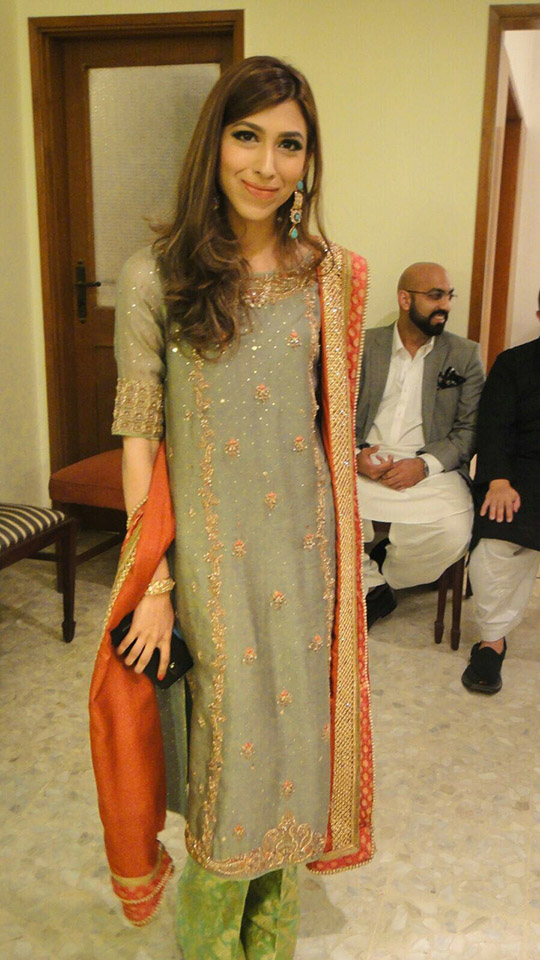 Rabia at the wedding in Nadia Farooqui

What is the connection you drew between the different colours you chose for each occasions ?

I decided to go metallic for the mehndi outfit; hence a mixture of gold silver and bronze mostly but because it was a mehndi outfit the input of a bright color was essential – hot pink always saves the day! The Shaadi outfit was supposed to be kept very neutral and so for the base I chose two colors from the same family- light turquoise blue and sea green. The idea was to give a gradient and break it with a complimentary color which in this case was rust. For the Valima I chose to keep the colors very self-oriented. White on white with hints of gold- I wanted the whole look to have no contrast whatsoever.

What would you consider to be your signature technique when you design each outfit?

I believe that as far as handwork goes , anything and everything is possible- what is more important to me is preparing the base first that is the cloth that has to be worked on. Whether it’s through putting different textures of cloth together or the process of layering cloth in certain parts for it to stand out- I feel that adds the oomph factor for each outfit! 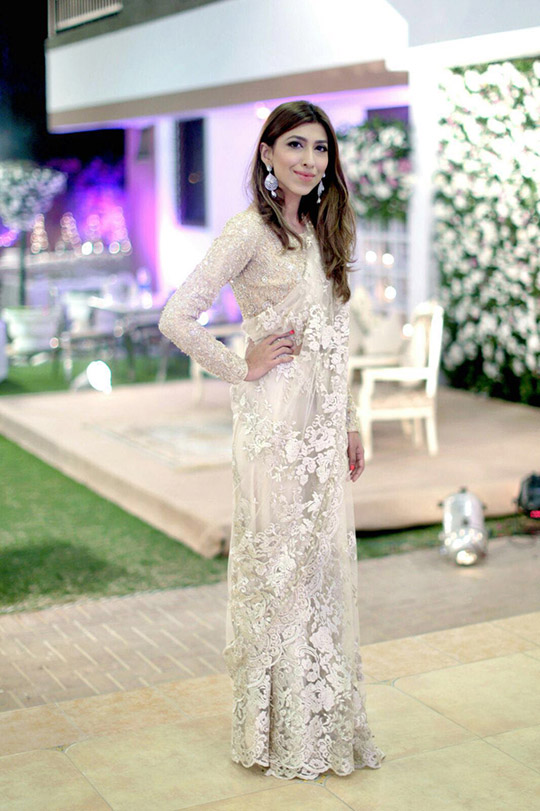 Rabia at the Valima in  Nadia Farooqui

How would you describe your own style, would you have done something different?

My own personal style is minimalist – straight clean silhouettes with minimal embellishments. However, I am more experimental as far as colours go and am not afraid to wear bright, bold colours. 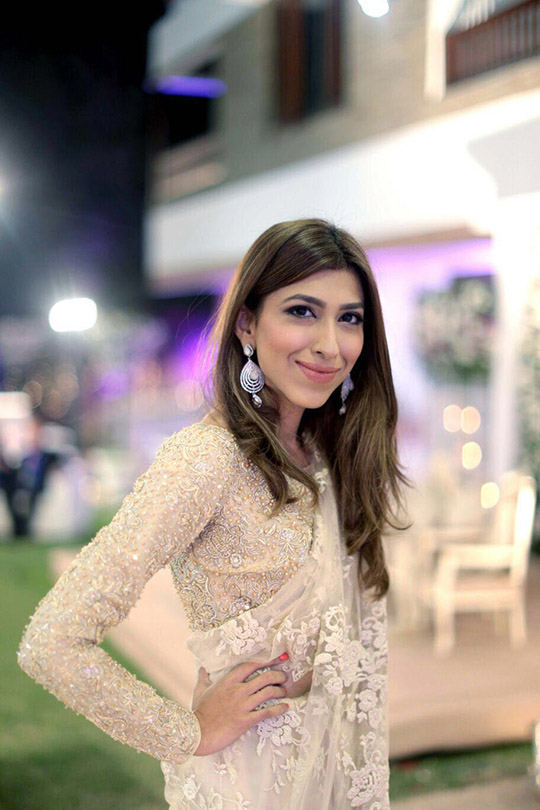 Tell us what you have in store for Nadia Farooqui SS’16?

We are extremely excited to launch our Spring/ Summer 2016 which focuses on shorter hemlines and fun silhouettes including jackets, capes & peplums. Look out for our Annual Spring Exhibition some time in March where we reveal our SS’16! 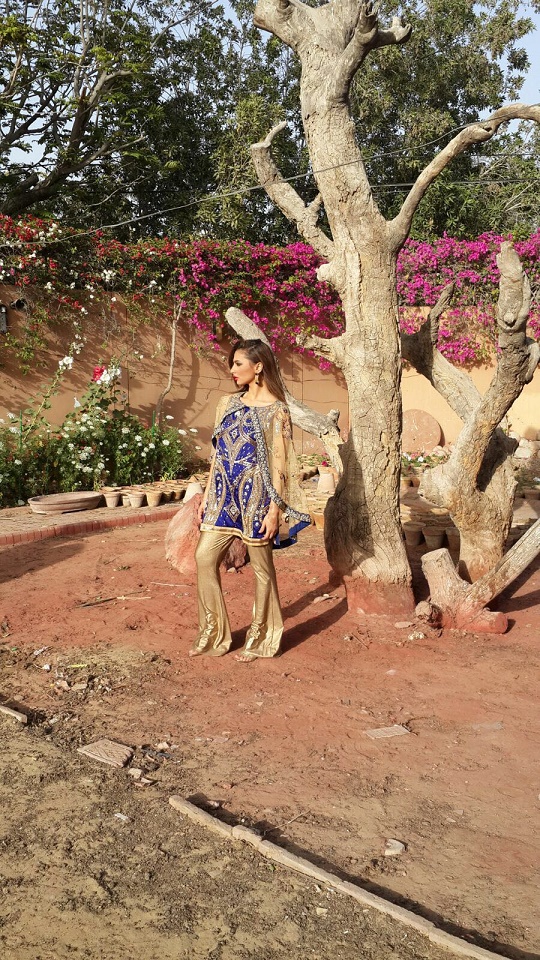 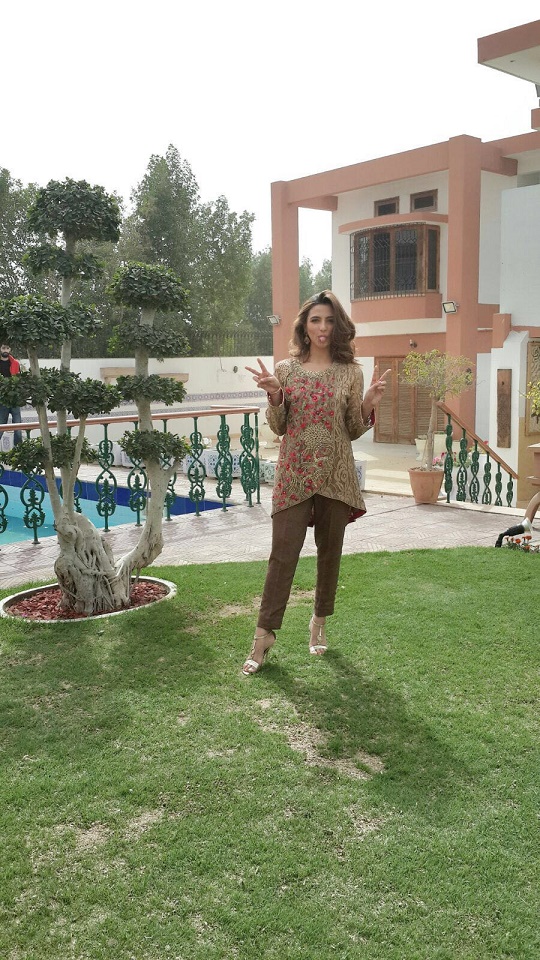 
Winter festive season is upon us which means it’s officially time to don some picture perfect shawls. No outfit is…

5 Best T-Shirts for Women from Ideas to Wear on Repeat!


T-shirts have long been one of the most versatile items in any women’s apparel collection. And it is no surprise….

Style Notes: 9 Local Jewelry Brands To Watch Out For!


Wearing the perfect outfit is nothing without jazzing it up with some statement accessories, it’s what truly makes an outfit…