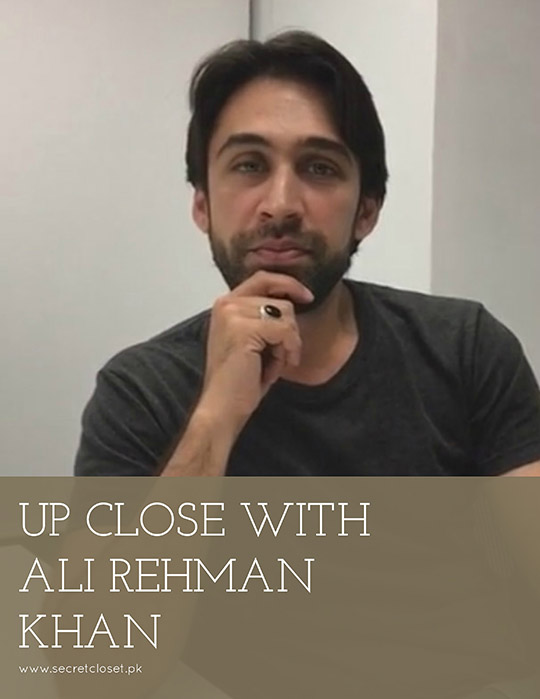 We sat down with rising star Ali Rehman Khan- the actor has previously acted in several movies including hits like Janaan and Yalghaar working on a new project right now; we have high hopes that Parchi will be a total hit! Sitting down with the actor we wanted to get to know Ali Rehman the person a little better- his likes, dislikes, take on fashion, film and more! Check out the full interview below:

What’s one thing you can’t live without?

Ali: As in a generic thing or me Ali Rehman can’t live without? I can live without a lot of things- but I think one thing I really enjoy having in my life is a phone- it keeps me connected with people.

Ali: Jeans and a Tshirt.

What’s your go to everyday style?

If  you could be anywhere in the world right now, where would you be?

Ali: Vienna- I lived in Vienna for four years so it’s like a second home; so if there was any place else I would rather be right now it would be in Vienna.

When you’re at home you’re wearing?

I’m wearing a T-shirt and it’s the summer then shorts and if it’s the winter, jeans.

You’re constantly traveling for film promotions, what are some essential items you take everywhere with you?

Ali: I usually always take a face wash with me; a good face wash I really like to take care of my skin because it’s a big asset for us. Good cream to moisturize- it’s definitely very necessary. I don’t like using too much product. Apart from that maybe some comfortable flip flops and a t-shirt and of course a good cologne.

Ali: I don’t have a favorite food; I like food in general- food is good, you know- eat at home! There’s so much, I don’t believe in this favorite business.  I feel like as a human being you’re limiting yourself and humans are meant to be diverse. One of the favorites; yeah daal, I love daal. I love bbq- chicken boti and all of these things. Anything that’s spicy- I love spice so if it’s spicy if it’s got a tinge to it.

What’s one fashion trend you hate?

What made you want to become an actor?

You’re on a deserted island, what are three things you take with you?

Ali: Water of course, I would say water and food together. I would have my tooth brush, or if there’s miswaak on the island then that would be great. I would have maybe a book or a library- something I regret not being able to do right now is read. I would have a gym, work out maybe and I would probably have some type of technology like a phone.

Ali: One of my favorite roles I’ve played was actually from theater, called Someone Who’ll Watch Over Me and I played an English professor; it was a role that I thought was very close to me. It was a very intense role that I played- I played the role with Osman Khalid Butt and it was just a three man play- there was no music, there was no dance but there was comedy. So I think that is my favorite performance.

What are some upcoming projects we can look forward to?

Ali: Parchi! Parchi is a film I’ve just done with the same crew as Janaan. It stars me and Hareem in the lead roles. So, yeah really looking forward to that!

What song are you currently listening to on repeat right now?

Parchi- the theme song to Parchi; I’m sorry it should be out right now! On repeat otherwise I have this other song that I’m really into it’s by Dua Lipa it’s called New Rules. And I really like that song I really love the video so that‘s something I’m listening to a lot these days and Parchi.

Any actor you look upto?

Ali: Oh, I look upto a lot of actors- In terms of actors I really look up to Robert Deneiro, Al Pacino, Abid Ali Sahab in our own industry, Meryl Streep- phenomenal actors. You know I think every actor or actress in their own right has the ability to change you as a performer or to inspire you in some sort of way. So yeah I don’t have a favorite but I have many inspirations.

One actor or actress you could work with over and over again?

Ali: Hareem, of course- I can definitely work with her over and over again. I’ve worked with Bilal Ashraf, he’s a very good friend of mine also such a great human being so I think Bilal is someone who I would love to work with again and who I could easily work with again. Osman Khalid Butt- we started our careers together- I always enjoy working with him.

Watch the trailer to Parchi: https://www.youtube.com/watch?v=blzsRyH7EXM

Whats In Store? -Hobo by Hub's End of the Season Sale

Style Notes: Esfir's One Of A Kind Collection-Seven Deadly Sins!